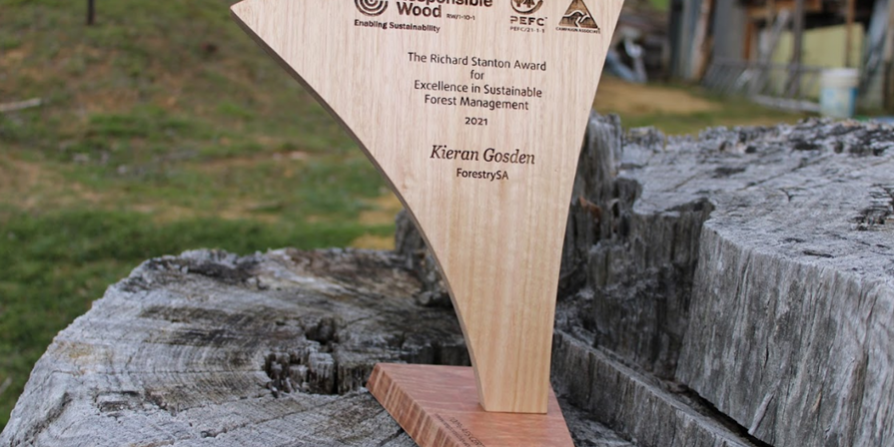 A FORESTRY SA ranger stationed at Mount Gambier in the Green Triangle whose work has extended to native vegetation management and as a communicator in the region has won the coved Richard Stanton Memorial Award for 2021.

The award and trophy, presented remotely during Responsible Wood AGM, recognises the life of a man who was devoted to the forest industry in Australia and internationally. Mr Stanton was former CEO of AFS Ltd (now Responsible Wood).

Kieran Gosden’s contribution to sustainable forest management and chain of custody systems were recognised at a presentation during the Responsible Wood AGM this week.

Nominated by Amie Power, of ForestrySA, Kieran has worked with the local community, businesses, schools, conservation groups and tourists to improve their engagement with the forest sector.

“Kieran’s involvement with the red-tailed black cockatoo, in establishing biodiversity corridors and linking isolated native forest with strips of revegetation and in the success of the award-winning Ghost Mushroom Lane and the ‘Dry Cave experience’ received high acclaim from the judging panel.”

Her ‘can-do’ community spirit and enthusiasm for sustainable forest management was recognised during a recent Responsible Wood audit conducted by Global Mark.

Through the establishment of biodiversity corridors, Kieran has joined with local communities and Responsible Wood-certified forest managers, including HVP Plantations and OneFortyOne, and the Department of Environment, Water and Natural Resources, to link areas of isolated native forest with strips of revegetation.

Keiran’s work has also extended to conservation groups such as Bird Life Australia to identify nesting areas in the native forest for the endangered red-tailed black cockatoo.

She was instrumental in the success of the award-winning Ghost Mushroom Lane, an initiative involving Responsible Wood-certified Forestry SA and OneFortyOne, acting as tour guide for ‘a seasonal forest experience’, drawing thousands of tourists to Mount Gambier.

And finally, in the establishment of the ‘Dry Caving’ experience, working with the Cave Diving Association of Australia (CDAA) to connect community with an extensive subterranean network of limestone sinkholes and caves in the Mount Gambier and surround Limestone Coast region.

All these areas embody important elements of the Responsible Wood standard.

Responsible Wood was delighted to receive a large number of high-quality nominations.

Three entrants in the 2021 Stanton Award, including one in New Zealand, were highly praised by the Responsible Wood judging committee and recognised by the presentation of certificates.

The judging panel would like to congratulate Kieran Gosden as a truly worthy recipient of the  Richard Stanton Award.