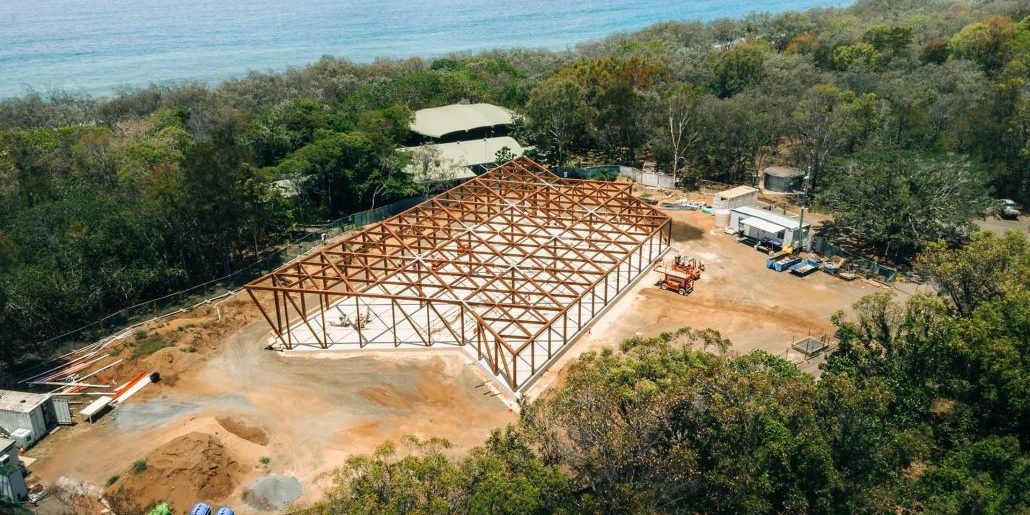 Have a look at two finalists of the Best Use of Certified Timer Prize, supported by PEFC: a gymnastics centre that can be converted into an exhibition hall, and a research facility that chose timber for its robustness against corrosive sea air and cyclones.

The Ariake Gymnastics Centre in Tokyo is designed to function in two phases: initially as a temporary sports competition facility, to host the Tokyo Olympic and Paralympic Games, later as a permanent exhibition hall.

Timber is used throughout the building, to express a commitment to sustainability and the memory of the site which was once a timber storage pond.

The roof frame structure, façade, spectator seats and exterior walls are all made of timber, and benefit from its diverse characteristics.

The ceiling is a wooden frame structure designed to reduce the weight of the overall structure. Japanese cedar wood was chosen for the exterior walls, as it fulfils the demand for thermal, as well as sound insulation performance.

Function, structure and space are tightly combined to achieve beauty and richness in simplicity, which is the essence of Japanese traditional wood architecture that athletes and spectators from around the world will experience.

The Mon Repos Turtle Centre in Queensland is a research facility at Mon Repos beach, Australia’s most important turtle nesting ground, and hosts key research into endangered turtles and the impacts of climate change.

The building operates as an interpretive centre during the day. During the turtle nesting season, it is a briefing hub for up to 300 visitors each evening.

The building consists of a large gathering space – “the courtyard”, an interpretive space, and research and office spaces.

The project used locally grown spotted gum wood for the structure, which is protected by a copper cladding. This combination allows the building to breath whilst avoiding any artificial light spill at night which affects the navigation of the turtle hatchlings on their journey to the ocean edge.

The structure and building fabric were designed to withstand the corrosive sea air and seasonal cyclones for a lifespan of over 40 years. It was largely prefabricated to be constructed in only seven months between turtle nesting seasons.

The building immerses itself into the landscape of grassy dune forms and trees, ensuring it is a demure addition to this sensitive and ancient home to the turtles.

The Best Use of Certified Timber Prize, supported by PEFC

The World Architecture Festival and PEFC are awarding the Best Use of Certified Timber Prize for the third time.

Again this year, architects and project teams from around the world entered their buildings into the prize. The jury will choose the winner on 3 December during an online session, in which the architects will present the shortlisted projects.

Designing the future with sustainable timber

Across the world, the architecture community is embracing solid and engineered wood to deliver high-profile, award-winning projects and everyday designs – from houses, schools and hotels to offices, theatres, supermarkets, and swimming pools.

Under the theme Designing the Future with Sustainable Timber, a range of stakeholders have come together under the leadership of PEFC to promote the use of wood in construction in general and certified wood in particular. Join us! Contact us at fabienne.sinclair@pefc.org