Awarded for the first time at the World Architecture Festival (WAF), the Best Use of Certified Timber Prize, supported by PEFC, brought extraordinary buildings and inspirations for a sustainable future in construction. Besides the winning project, the jury highlighted two more outstanding constructions… 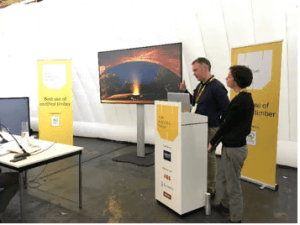 Located in North East National Park, the camp serves as a stopover for visitors taking guided walks through the aboriginal land. A key priority of the project was environmental awareness and respect for the native culture.

In considering the cultural background, the architects aimed at preserving the encounter with the cultural interior, while at the same time delivering a modern building typology for a high quality tourism experience. 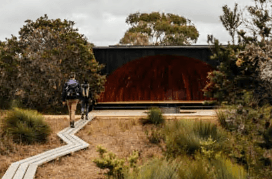 The result is a protective shroud that conceals the cultural interior, preserving the agency of the aboriginal community in the telling of their story.

All linings were installed on site, with the help of members of the local aboriginal community.

A place for telling stories 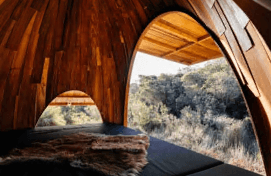 A fireplace at the mouth of the dome invites everyone to gather and listen to the captivating stories about two centuries of war, aboriginal dispossession and exile, and the eventual return of a sacred landscape.

By the end of the 19th century, the surviving aboriginal community was forcibly removed from a landscape to which it had belonged for over 40,000 years.

Situated in a sacred site, Krakani Lumi seeks to set the scene for the telling of a very large story.

“We have always sought to achieve an architectural sensibility that allows the spaces of Krakani Lumi to make the fullest experiential offering to the aboriginal community in the telling of their story,” said Mat Hinds, director of Taylor and Hinds Architects.

“Krakani Lumi is a remarkable project that gives Tasmania’s aboriginal community the opportunity to raise awareness for their story and their rights. Protecting indigenous people’s rights is also a priority for us at PEFC, and a key part of our revised Sustainable Forest Management benchmark standard,” said Ben Gunneberg, CEO of PEFC.

The Best Use of Certified Timber Prize supported by PEFC

The World Architecture Forum (WAF) recognizes outstanding architecture projects in various categories. Together with PEFC, WAF awarded the Best Use of Certified Timber Prize for the first time this year.

The prize recognises architects for their use of certified timber as a main construction material for buildings outstanding in sustainability, innovation, quality or aesthetics.