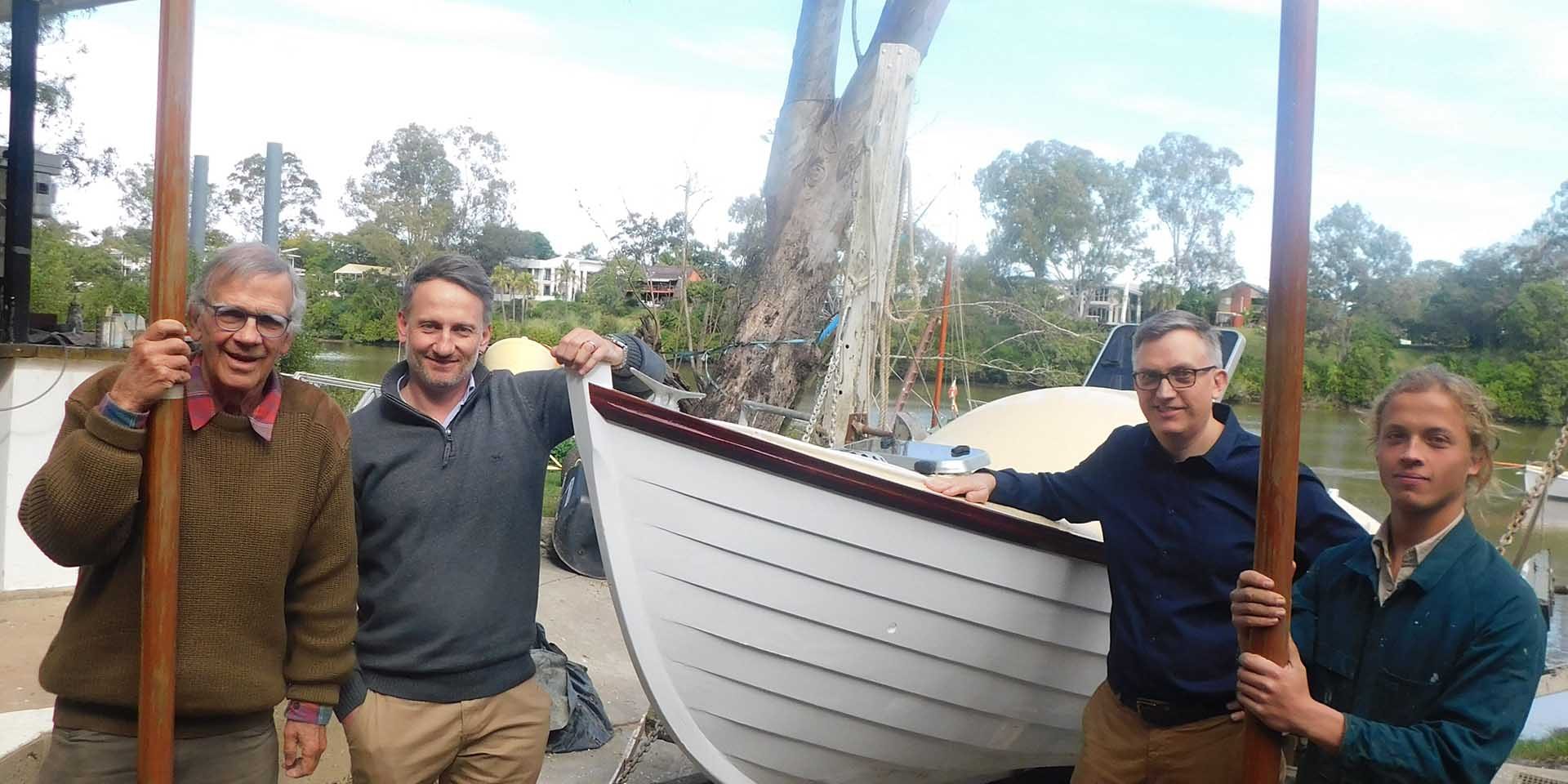 As featured in the Timber and Forestry E News

MORE “an exciting adventure, than a challenge,” says Tom Robinson, a 22-year-old Australian sailor and boat builder from Brisbane, who will row 14,800 km from Santiago in Chile to Brisbane in January in a quest to be the youngest person ever to row solo across the Pacific Ocean.

Tom’s journey will consist of four separate legs, with stops in between to re-supply and to experience the cultures and bio-diversity of some of the world’s most isolated and beautiful islands where he will have time to “fill up on tropical fruits”. While at sea he has a pump-action convertor to turn sea water into fresh drinking water and a well-stocked supply of dry foods will be stored below deck,

The timbers chosen are a magnificent mélange of mostly Australian species. The all-important hull has been shaped from true Responsible Wood certified AAA marine plywood peeled from Queensland hoop pine and donated by Austral Plywoods. 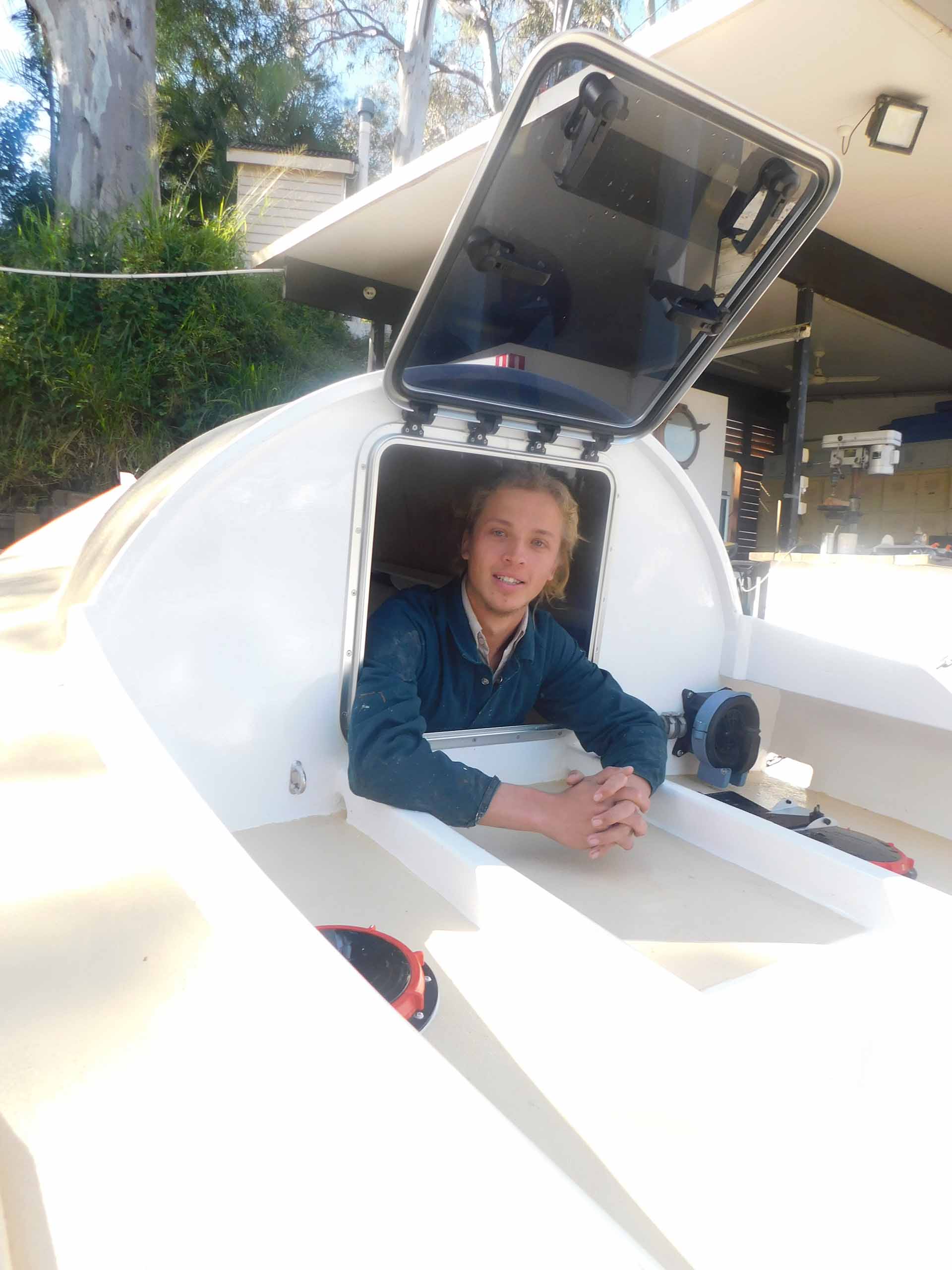 “We like to think of it as an ‘AAA’ plywood,” said joint CEO Stuart Matthews who with his brother Scott was at the Carrington Boating Club beside the Brisbane River to look over the boat – almost finished – and to  wish Tom well.

Mr Matthews said marine ply must have an ‘A’ face and back, ‘A’ core veneers throughout, and an ‘A-bond glue system.

“If it doesn’t have any of these characteristics it’s not marine plywood,” he said.

Timbers that will keep Tom’s boat on a steady course include laminated recycled Oregon for the keel and stem, spotted gum for the ribs, western red cedar and more hoop pine for the frame and Australian cedar for the hog, a semi-permanent bend in the keel.

Two sets of oars, one of spruce pine, the other carbon fibre, complete the basic fit-out.

Tom will be at sea nine months in a wooden vessel he has designed and built by hand.

Tom says the design was inspired by his cumulative search for the ideal ocean-rowing vessel.

“Her lines are based on the whaleboats that frequented the Pacific in the 19th and 20th centuries,” he said.

“Although she features traditional lines, she will be an extremely safe vessel – self-draining, self-righting and unsinkable.

“The marine ply and modern epoxy glues provide a lightweight and strong monocoque hull. She will be built to exacting standards to withstand even the roughest weather the Pacific Ocean can throw at her.”

If there was a challenge for Tom it was to design and build the cabin, a daunting task as the top hamper of a vessel will make or break the aesthetic value of a boat, he says.

The solo rower has the support and encouragement of his mum and dad, Tim, who himself has a spent a lifetime devoted to boating. In fact, Tom is descended from a long line of seafarers. His granddad was a boatie and along his lineage are many sailors, including an ancestor who was an admiral in the British fleet.

Tom will use his ocean rowing boat as an example of how wood can be used sustainably and effectively.

“The timber was grown an hour’s drive from where I live and the plywood factory is just 10 minutes down the road from my boat shed. It’s hard to get more sustainable than that,” Tom said.

“I could have bought a cheaper and more lightweight plywood from questionable sources in Africa that was shipped to France for manufacture before transport to Australia. This is hardly environmentally friendly or sensible.

“With modern coatings, I know that my boat will have a long and serviceable life.”

Captions: Tim Robinson (left) and son Tom with Scott and Stuart Matthews of Austral Plywoods, who donated marine ply for the hull, get together for an inpection of Tom’s boat.

Captions: Tom Robinson emerges from below deck where he will spend many hours on his cross-Pacific journey.